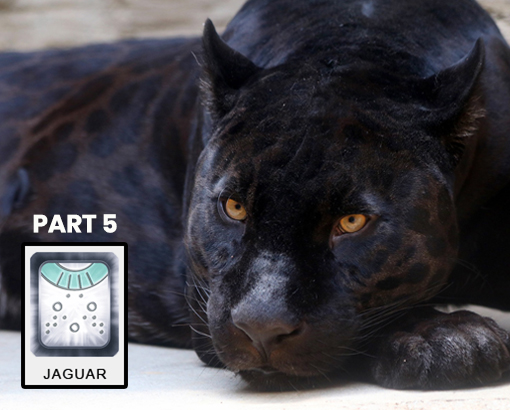 Here is Part 5 of Mayan Jaguar Time. In this series, Belit shares her discoveries as she explores her Mayan Jaguar Sign.

You’ll find links to all previous articles at the end of this page.

I am now, IMHO, totally armed and ready to immerse myself into my day sign, to commit to this Jaguar Life and begin on the journey to meet me.

I felt my next step should be to learn about jaguars. How they move, how they think, how they live and begin to incorporate this knowledge into the essence of me, from the aspect of the actual traits of a jaguar to the thoughts of the ancients and how that translates to being a two-legged Jaguar on this path.

The Jaguar in Nature

The species was once prominent in North America. They are the only large cat native to the Americas.

Now, the strongest concentrations of them are found in Central and South America, from the southwest of the US, with the occasional stray in Arizona to southern Paraguay and northern Argentina. They inhabit a large range including jungles, swamps, mountains, and forests in some 18 countries.

They seem to prefer forested areas and they are one of the few cats that actually enjoy swimming and they can be seen, on rare occasions, swimming in ranges of water.

Jaguars are the third-largest felines on the planet, second only to tigers and lions.

Jaguars and some black panthers are the same species, with the only difference being black panthers have more concentrated melanin. Even though it seems that black panthers are solid black, they have, in fact, spots on their fur, with what is called a ‘rosette’ in the middle of the spot. Their fur ranges from light to tawny to ‘black’.

Jaguars also look similar to leopards, but they have a more compact body and a squarer shaped head. Leopards also have a rare melanin type that creates blackness, and these are also called Black Panthers, even though these are two different animals.

Compared to leopards, jaguars tend to live in denser forestation. They are often darker in color, smaller in size, and range from 123-212 pounds.

They also have the shortest tails of the large cats.

Jaguars in nature are strong hunters, like soldiers, and they are highly intelligent.

They’re some of the most mysterious and elusive animals on the planet, and it is only in recent times that much of what we know about them has been discovered.

They hunt primarily at twilight, and at dusk, they are equipped with very acute night vision. They’re also perceptive of natural disasters.

Jaguars are feared and respected hunters applying a stalk, ambush, and attack from the blind side tactic. Their fur helps keep them camouflaged. They can bring down prey significantly larger than themselves and can even drag this prey high into trees for later consumption. They have the strongest bite of all the big cats, which can break through the skin of reptiles and can even pierce through the shells of a tortoise.

Primarily meat-eaters, they have also been found to enjoy the roots of ayahuasca, an entheogenic plant teacher.

Unfortunately, at this time with jaguars having been hunted for their skins and body parts for such a long, and having suffered a great loss of land due to human interference, these cats are almost to the point of needing conservation protection and will be placed under protected status soon if the killing continues unattested.

The Essence of The Jaguar – Wisdom of The Ancients

Jaguars have a very special history.

The great ancient kingdoms of the Olmecs, the Aztecs, the Inca, and the Maya were very respectful of the Jaguar. She is one of the main animal totems of the ancient kingdoms and second only to the Serpent in ancient stories. Each tradition has its own stories, and the Olmecs even had their own jaguar stories.

To the Maya, she is the 14th-day sign and is recognized as I’x in the Mayan tongue. In Mayan tradition, her name means, “she who kills with one blow”, or the “silent one” as you would not hear her coming until it was too late, if at all.

She is connected to the cosmic essence and is the bringer of High Magick.  She’s the Wizard, the Magician, the one who is connected to intuition and possesses psychic powers. She is the shape-shifter, the ruler of the underworld, and in unification with the night ‘sun’. She’s a gatekeeper, a guardian of the ancient mysteries, and a dream-watcher. She also has a magnificent temple at Chichen Itza – which was tended by anointed Jaguar Priests – called Chilam Balam which is dedicated to the power, ferocity, valor, and aggression of the jaguar.

In Mayan tradition, those who are born with the Day Sign of the Jaguar are trained to be Day Keepers, the ones who keep the traditions of the sacred calendars. They are the guardians of sacred time. They are given special training for their life’s mission and have their own dwelling separate from that of the general populace thus maintaining the sanctity of their journey and their need for solitude.

Jaguar also exhibits the traits of feminine power, earth energy, speaking your truth, and being authentic. She is also known to change negativity to positivity, by transmuting the energy around her. She’s a natural artist with great passion and supernatural abilities.

She’s been given many talents and has vivid dreams which can provide her with guidance and ancient knowledge. She has strong intuition and is mysterious to those outside of her circle. She’s sensuous, elegant, sophisticated, and graceful.

People confide in her and she knows she has a higher purpose. She has the power to face her own fears. She has knowledge of things to come. She’s connected to the earth chakra and the root chakra. She is spontaneous, complicated, connected, and she has a great love for animals and for Mother Earth.

She is able to see what others do not see and as such, she can see into the depths of the human soul. Her correspondences are the North, White, and the Moonstone.

How This All Fits Together

At this point, all this information can be overwhelming. It is a lot to handle in 10 sittings, let alone one sitting. So, we have to break it down.

In thinking back to the things that stood out in my readings, my consultation, and research, let’s just take three major things:

I looked back over my life and found how these three things were, are, and will be essential for maintaining peace and harmony on my path. So, absorb all of this and we will tackle Jaguars’ need to be authentic and speak their truths next time on Mayan Jaguar Time.

Are you a Mayan Jaguar?
If so, share some of your discoveries in the comments below.

All articles in the Mayan Jaguar Time series: