Mayan Astrology Signs – What are the Mayan Readings?

The Basis of The Mayan Astrology

Shamanic spirituality is at the core of the Mayan culture, and one of their precious heritages is their calendrical system. There is more than one Mayan calendar, and the most famous one is the Long Count calendar, which according to the archeologists, and not the Mayans themselves, would end on December 21, 2012. This end date was unfortunately interpreted as doomsday by the masses, which later was seen as an inaccurate prophecy of the Maya. Nevertheless, Mayans, including their spiritual leaders and daykeepers never mentioned of such a catastrophic end. Long count is simply a cycle of 13 Baktuns, which equals roughly to 5125 years, and the end of it suggests yet another beginning. We want to keep only this introduction about the Long Count since the depth, and the width of it exceeds this website.

Tzolkin is a divination system of the Mayan Civilization of the Meso-America. Contrary to the Long Count calendar, it is a 260 days cycle, which never ends. If the Long Count (or the Tun system in a broader sense), is about global changes and predictions, Tzolkin is a guidance system for the individuals, which offers a simple yet profound spiritual guidance. What we call here Mayan Astrology is the sign system of the Maya, not based on planets or the constellations, but based on Tzolkin, which indeed follows the internal spiritual time.

How is Mayan Astrology compared to the Classical Astrology readings?

Tzolkin in the Yucatec language or the or Cholq’ij in the Kiche language is based upon a 260 days cycle, in which every one of these days has a unique energy combination. The days are tracked, recorded and honored by certain ceremonies by the Mayan Daykeepers, from generation to generation, without a gap for about 2500 years.

“Tzolkin is mathematically perfect; it has never been changed, and there never will be a change on it. Its certainty is a result of centuries’ long observations and works of significant Mayan astronomers, astrologers, mathematicians and wise people. It is a complete tool that helps us to understand the purpose in our miracle of life.”

The Mayans created the Tzolkin calendar, not solely on astronomical observations; they based the Tzolkin on shamanic trance states, and so they were able to reveal a calendar which explains the flow of the spiritual energies. Consequently, it is different from all the other material calendars and astrological systems that we have. Many spiritual teachings of our planet suggest that the spirit comes before the matter. Bible says “first there was light,” in Islam Allah blew the spirit into our bodies. In the Mayan mythologies, we often hear that life is given to the matter by the spirit. If to agree with all this, one might wonder how we could accurately understand the spiritual evolution while using material calendars? How much of our spiritual nature can be perceived with following systems based on the rotation of the material bodies (the Sun, the Moon and the planets)? Certainly, one might argue that all the stars and planets also have the spirit of their own. Nevertheless, in Tzolkin the time units are based entirely on metaphysical cycles, which is the secret to its simplicity, yet high accuracy. The guidance that the Mayan calendar offers us is primarily about our spiritual evolution.

Each 20-day cycle of the Tzolkin is called “uinal.” A different god/deity (Day Sign) rules Every day of the uinal. These Day Signs are called “Nawales” by the Mayans. Each of these Day Signs brings about a different resonance that governs the spiritual universe. No 20 days cycle could be observed from Earth, as an astronomical cycle. Therefore Uinal has no physical basis.

Based on their observations, transferred from generations to generations, Mayan daykeepers concluded that the birthday of someone brings the best-supporting energy for the life purpose of this individual. Which means that every one of us is born on the day that was ruled by the Day Sign, which would support us in the best way on our purpose in this life. Every one of has a Higher Self that chooses the date of birth to come into this life before incarnation. Following up on this wisdom, understanding the influences of the energies of the day that one is born, will help to recognize what kind of a life purpose one has. To be able to attune with your individual life purpose, it is best to align yourself with your Day Sign, the primary energy that was ruling when you were born.

“For thousands of years, Mayas have been ruled by one of the most balanced social organizations known to mankind; a theocracy. During this time, the orders and government were based on the sacred Tzolkin calendar: Each individual of the society assumed their roles according to the energy and sign of their birthdays. Therefore chaos was avoided, and the Mayas were able to grow up according to their own predominant skills and characteristics because everyone was doing what he or she were supposed to be doing.” (Carlos Barrios, The Book of Destiny). 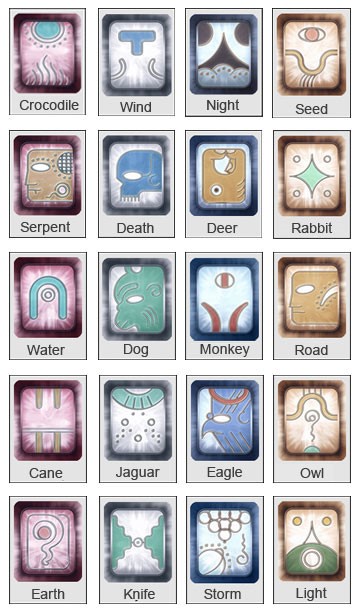 Here is the order of the 20 Day Signs.

According to the Yucatan Maya system, Imix (Crocodile) is the first sign, and Ahau (Light) is the 20th one. Although the order of signs does not change, for Kiche Mayas the first day of the cycle is B’atz (Monkey) and the last day is Tz’i (Dog).

The 13 days cycle in the Tzolkin is called Trecena. Each day of the Trecena has a unique vibration, just like in the Uinal. Similarly to the musical tones, energies of the 13 days are called “Tones.” Since a 13 days cycle is also not observed astronomically, they are called Galactic Tones or according to some other experts, Cosmic Tones. Each one of these tones has a different vibration and therefore have a unique influence on us. Mayas perceive the number 13 as divine, contrary to common superstitions around it. However, think about it, Jesus had 12 apostles, and with himself, the total number was 13. Of course, this superstition that there should not be 13 people on a dinner table, comes from the perception of the Last Supper as being inauspicious. However, if you move beyond the common collective thinking, the symbology here is based on the number 13. There were 13 people who were trying to manifest the divine plan and change the fate of humanity, influenced by divine inspiration.

Since we were born in one of the days which was influenced by one the 13 tones, we can understand our relationship with the divine plan by understanding our tone. The tone of our birth is almost like a mirror that shows us where we stand in the big picture. It helps us to understand our role in the divine plan. We choose to be born in one of the 20 Day Signs with our higher selves, and we can call this “individual life goal.” However, we do not choose the tone we are born into; this is rather a mission that is given to us from the Universe, or the Divine if you will. 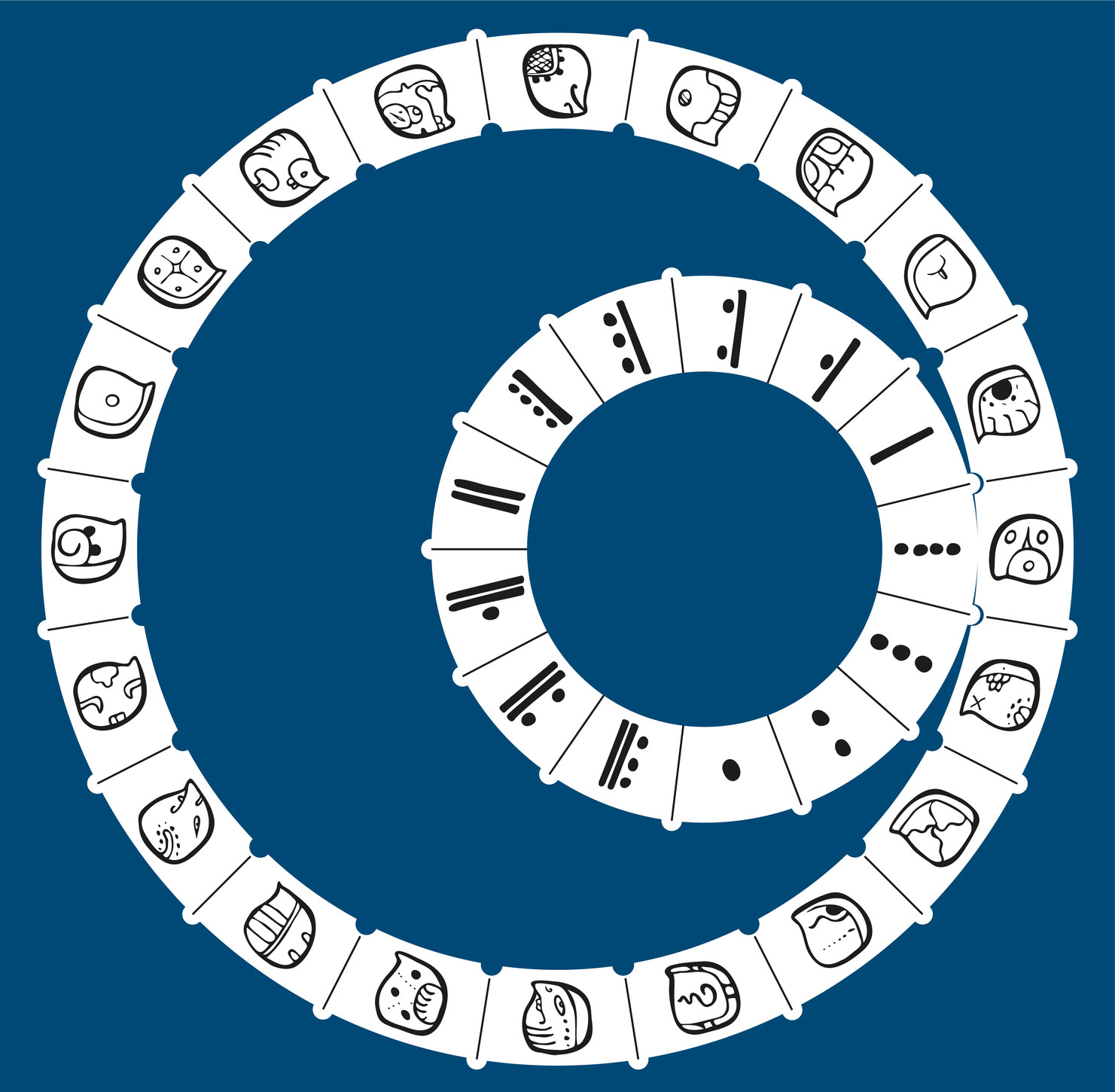 We were born in one of these 260 different combinations (Figure 4). Such diversity suggests that our date of birth points to a unique and special influence on our character and life path. 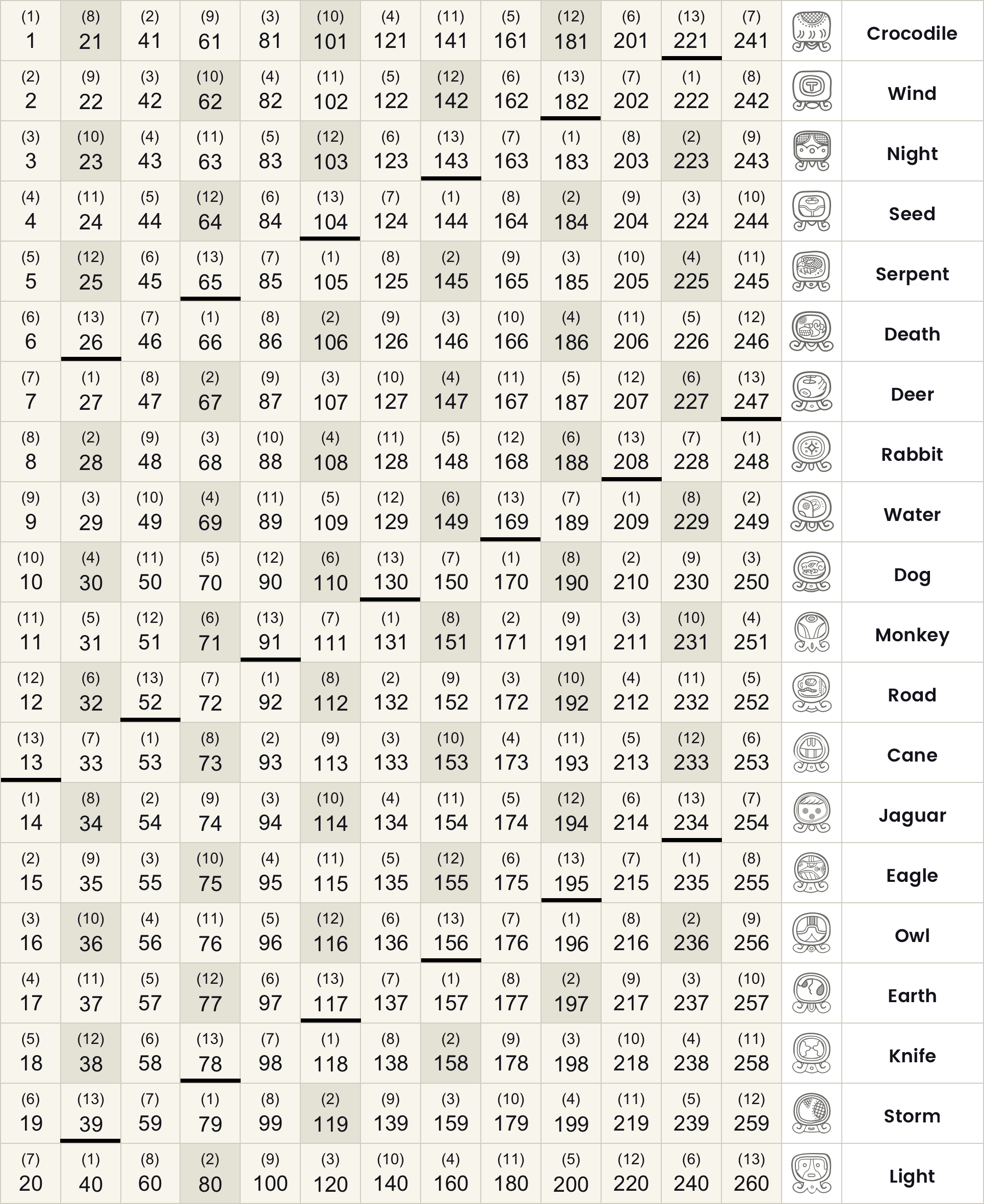 Hunab-ku, The Tree of Life and The Holographic Universes

In the Mayan Cosmology, the symbol known as Hunab-Ku has particular importance and it leads us to a deep understanding in our practice of using the Mayan sign system as a guide. This symbol reaches out to eight directions, with four main directions and another four in between them. Resembling the Yin and the Yang symbol of Taoism, the Hunab-Ku is also about the polarity of male-female or light-dark energies. Nevertheless, we mostly focus on its four directions for a practical understanding. There are similar Tree of Life symbolisms in other ancient cultures that point to four directions. To name a few examples; the Cross sign that was in use way before Christianity, and the Swastika that was already known in India, thousands of years before Hitler started using it.

Hunab-Ku means “The One God.” Also called the Universal Tree of Life, Hunab-Ku is thought to be at the center of the universe, and it is the source of consciousness and everything else. The recent scientific evidence shows that the universe may indeed have an axis. Some other scientific research talks about the “Holographic” structure of the universe, which suggests that the small and large units of the universe are one and the same. Fractal Geometry, developed by Benoit Mandelbrot is one such a field. The fractal or holographic structure of the universe also coincides with the Hermetic principle “As above so below, as below so above.” These principles make a foundation for the Mayan cosmology. 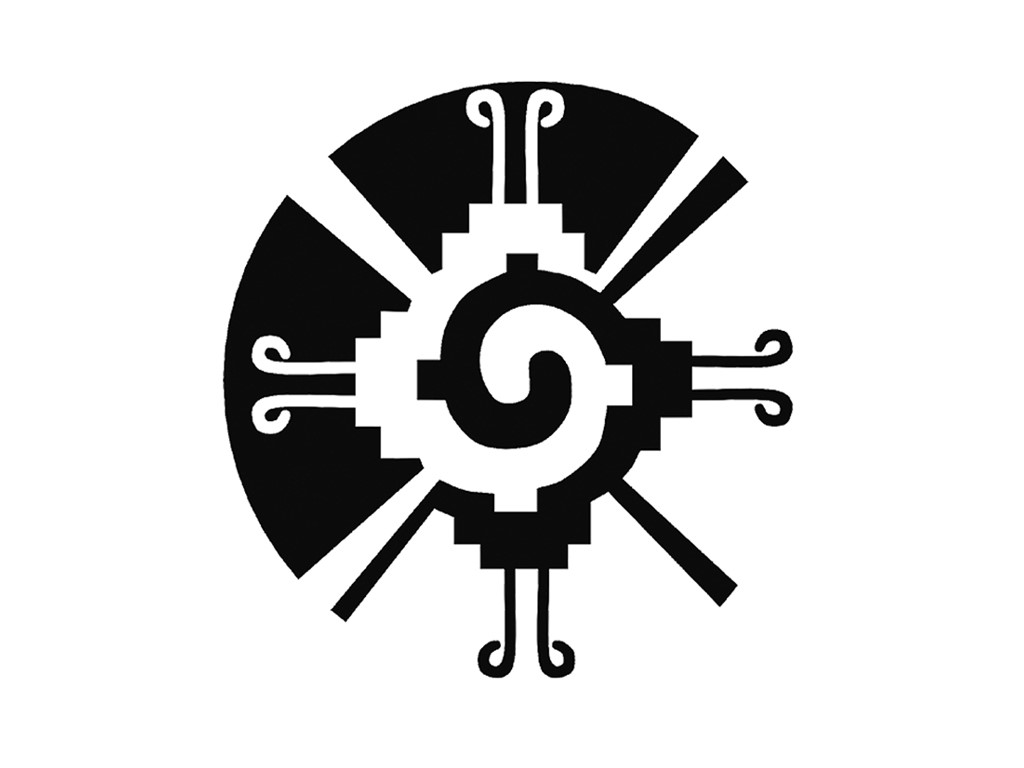 In other words, Hunab-Ku, the Tree of Life, shows itself also in our minuscule galaxy compared to this vast universe. We can also call this the Galactic Tree of Life. Our galaxy looks like a disc and expands in four directions. 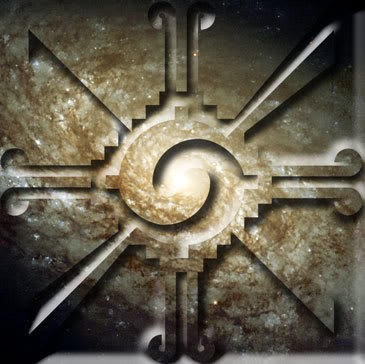 In the same way, there is a Hunab-Ku, a Tree of Life, on our planet that is comparatively “tiny” in our large galaxy. The World Tree expanding to four directions is depicted in various Mayan glyphs. 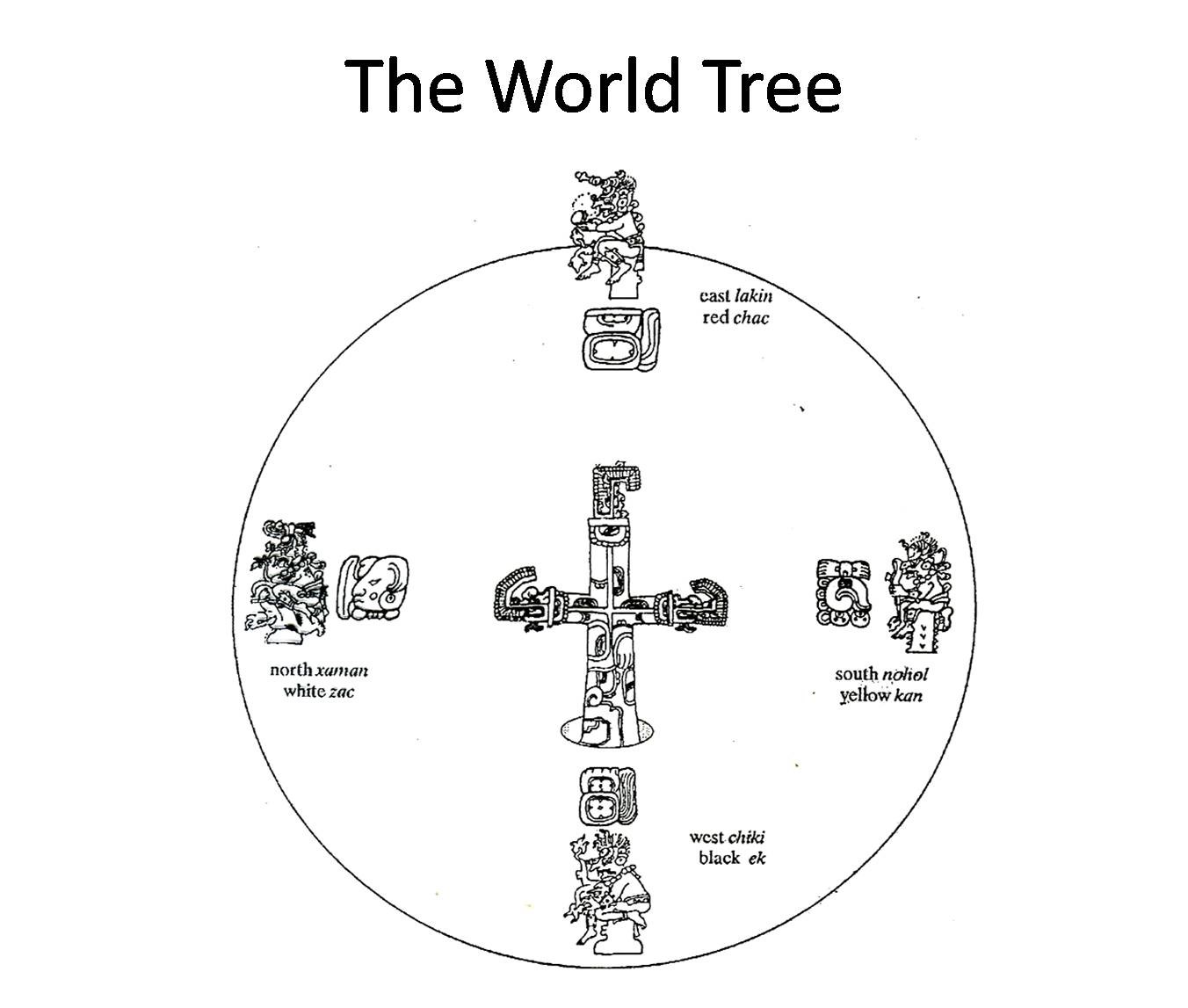 In accordance to the principle “as above so below,” we can argue that every person has a Tree of Life as well. This Tree of Life consists of the signs of the Tzolkin, and in addition to the four directions, there is also a Core Sign located at the center. 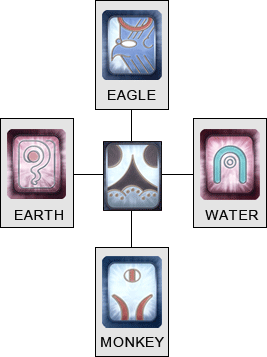 Figure 8. An example of the individual Tree of Life

You can read here more about the Four Directions, compatibilities and relationships based on Mayan Signs.