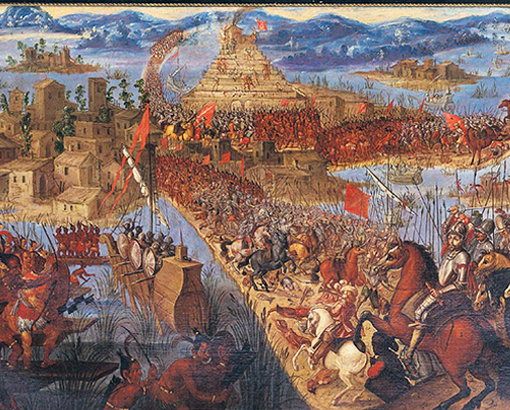 Most of us have heard of the Spanish conquistadors conquering the Maya, Aztec, and Inca Civilizations. We can get the impression that the conquest of America was immediate. Several dozen years after Europeans arrived in the new world. The three most powerful Civilizations, which were at a high level of cultural, social, and economic development, were conquered by a group of Westerners. But was it really so?

This article ‘’The Paradox of The Knights of Saint James’’, introduces a series of articles about the Spanish conquest of America. I will try to present to readers the conquest from the perspective of Europeans and Indians, so as to show this period impartially.

A few words on the ritual of this article:

Saint James is the patron saint of Spain and Portugal.

From 1170 in Spain there is the Order of Santiago. Hernan Cortes and Francisco Pizarro, amongst others, were decorated by this military order and considered to be two icons of the conquest.

I propose to readers to reflect on the Cult of the above characters.

The fall of the Western Roman Empire in AD 476 is a symbolic date ending antiquity and beginning the Middle Ages. The beginning of the Early modern period is assumed to be two dates.

The fall of Constantinople, the conquest of the city, and the killing of the last emperor led to the final collapse of the Eastern Roman Empire. The second date is Christopher Columbus’ arrival in America.

The “discovery” of America was considered one of the most important achievements of mankind.

“The most significant event in history since the creation of the world is the discovery of India (or America).”

“No event has fascinated mankind as much as discovering the New World and crossing the Cape of Good Hope to India.”

“The discovery of America and the route to the East Indies via the Cape of Good Hope are two of the greatest and most important events in human history.”

One of the first impressions most people have after hearing the accomplishments of the conquistadors on the American continents:

It is the statement that the discovery and conquest of America by Europeans is the work of a group of outstanding figures, a group of travellers.

This impression is often related to the Spanish propaganda of that period. Which completely ignores Native Americans and Africans.

Christopher Columbus, Hernan Cortes, and Francisco Pizarro are considered the most important figures of that period.

Christopher Columbus is identified as the discoverer of America. And it may seem that if it hadn’t been for him, America would never have been discovered.

Nothing could be more wrong.

It is forgotten that this Genoese in his time was not the only sailor who wanted to sail west of Europe. Such trips were previously organized to Flores, Corvo, Cape Verde Islands, Gulf of Guinea, Madeira, and the Canary Islands.

And in 1500 Alvarez Cabral reached the shores of Brazil, and in 1499 Alonso de Ojeda to Venezuela.

Cortes and Pizarro are considered to be the icons of conquest.

Cortes was such a popular and iconic figure in his time that people began to make pilgrimages to one home in Spain. This posed a political threat to the King of Spain.

But how did the people and the world know about the exploits of Cortes and the other conquistadors?

The source of this information is Probanzas. It was a report that the conquistadors sent to the monarchs after the process of exploration, conquest, and settlement had been completed.

The first reason these reports were made was to inform the king of new discoveries and natural resources. The second reason was asking the ruler for awards, titles, and positions, hence the name probonza de merito (proof of merit).

Probonzas were the reason why, for their own benefit, the conquistadors exalted their own merits, and learned the merits of other people. For this reason, these reports are often biased, the probonza was to play the role of justifying Spain’s imperial politics as a promoter of civilization.

Just like the modern powers, the Spaniards wanted to ensure themselves justification, a legal facade.

One of the methods was to read the legal documents to the natives – conquest permits, before proceeding with force.

The most important legal trick was to locate cities.

The Spaniards placed particular emphasis on the location of cities. Contrary to the Portuguese, they focused on organizing trading posts, not settlements.

Cities allowed the Spaniards to create cabildos (city councils), which allowed for the introduction of legal acts.

One of the first examples is the founding by Cortes of Vera Cruz. Cabidos of Vera Cruz quickly wrote to the king, “It seemed right to all of us to found and populate a city with a court of law in Your Majesty’s name, so that Your Majesty could rule here, as in other kingdoms and districts.”

Often these were paper cities that were not built, and thanks to the cities, expedition leaders could claim new places. Francisco de Montejo located four cities on the Yucatan coast called Salamanca. In fact, only one was built. In the first period, the conquistadors were not interested in colonization and settlement, but in obtaining as much gold as possible and returning to Spain.

Another of the Spanish conquest procedures followed by most of the conquistadors was to find allies as quickly as possible. The allies offered the Spaniards food, goods, and information about where they were. After finding allies, Chicali the interpreter – one of the most famous translators is the Aztec aristocrat Malinche – helped Cortes.

Geronimo de Aguilar, who had survived a ship sunk off the Yucatan coast seven years earlier, knew the speech of the Maya language. In 1493, seven Caribbean inhabitants were brought to Spain, and they were taught to be translators.

Such procedures were followed from the beginning of the conquest.

Cortes and others followed these procedures.

The capture of the Aztec ruler Moctezuma or the Inca ruler Atahualpa were not brilliant strategies of Cortes or Pizarro. The capture of Tibetan rulers was a Spanish procedure from the beginning of their expansion. When, in 1493, the Haitian ruler Guacanagari tried to become independent from Columbus, Spanish members of the expedition demanded Columbus’ consent to his capture. They did not obtain consent. Another Haitian chief, Caonabo, was executed a year later. From then on, the Spaniards routinely kidnapped, imprisoned, and tortured indigenous rulers for ransom.

The last Spanish method of conquest I will write about in this article was terror.

The Spaniards committed many massacres and routinely enslaved surrounding peoples.

Hundreds of native prisoners had their right hands cut off (later whole arms). The women were murdered and then their corpses were sent home. Groups of unarmed civilians were murdered, women, children, and old people – an example is the Cholula massacre led by Cortes. There was the killing of participants in important rituals and actions, and the Tenochtitlan massacre led by Alvarado.

John Ogilby wrote in 1670 that the Spaniards conquered because of:

“fear which conquered more than slaughter”.

I hope this article is a good introduction to the outline of this vast topic of America’s colonization period.

The next article of this series “The Paradox of The Knights of Saint James Part Two’’ will bring organizational base, Aztec and Mayan Civilization, and evidence that a large part of the conquistadors were not Europeans. I encourage everyone to read the next articles in this series.

What is your biggest takeaway from this article? I invite you to share them in the comments.

If you have specific questions on this topic, you are also welcome to email me.