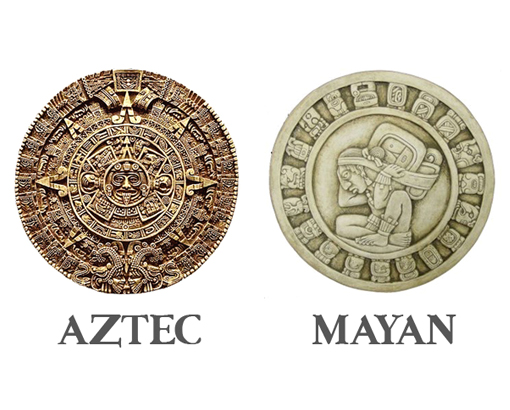 The Aztecs, who called themselves Mexica, mainly used the two calendars Tonalpohualli / Tzolkin and Xiuhpohualli / Haab, which did not differ in their mode of operation. One of the major differences between the Aztec vs Mayan calendars that we can see is the lack of a Long Count calendar (Mayan Long Count calendar).

In the Mayan Long Count calendar, the count of cycles can reach unimaginable time periods from the point of view of human life.

Meanwhile, in the Aztecs, the cycle would end only on the 52-year Tonalpohualli / Tzolkin cycle.

Both civilizations coexisted close together, so I personally think the Aztecs also used the Long Count calendar. However, what is known as the Long Count was introduced to be perfected by the Mayan in classic time.

The Tonalpohualli / Tzolkin calendar is a combination of three main cycles: 13 numbers, 20 gods of the day and 9 lords of the night.

The descriptions of these cycles in Tonalpohualli:

2. Teyollia (Spirit Soul – cycle of thirteen numbers) – Spirit Soul is implanted in the heart and provides for subconscious emotion.

3. Ihiyotl (Aura Soul – nine-day cycle) – Aura Soul is lodged in the liver and provides the fundamental life force necessary to survive. It is the energy that sparks and maintains life in the body and subconscious instinct.

Below I want to introduce readers to the Aztec calendars and their equivalents in the Mayan calendars.

The names of the Nine Night Lords of the Maya are unknown. They are written with the letter G and numbers. For example, G1, G2, etc.

But in Aztec astrology, we know their names:

Lords of the Day

Thirteen Lords of the Day accompany each day of the 13-day trecena.

According to most Aztec sources, these gods run as follows:

The second Solar calendar had no divination meaning like Tonalpohualli / Tzolkin. He was a civil calendar, was connected to agricultural practices, and held an important place in Aztec religion.

It was divided into eighteen Veintenas (Spanish for twenty), twenty-day periods:

The 18 Veintenas were succeeded by the Nemontemi, or nameless days, after Tititl, before the beginning of a new 365-day year.

Most Mesoamerican civilizations used one astrology that was given to them by the gods.

The same as the Chaldeans, who mention the Oannes who taught them agriculture, to read, write and study the stars. Western astrology is derived from the Chaldeans among others, but also from Egyptians, Greeks, Romans, and Etruscan.

Therefore, in this article, I wanted to briefly introduce you to Mesoamerican astrology from this side of the Aztec civilization.

It is worth considering whether it is correct to categorize astrology by culture?

What are your thoughts? I invite you to share them in the comments.

If you have specific questions on this topic, you are also welcome to email me.

2 thoughts on “The Aztec vs Mayan Calendars – One Astrology, Two Faces”