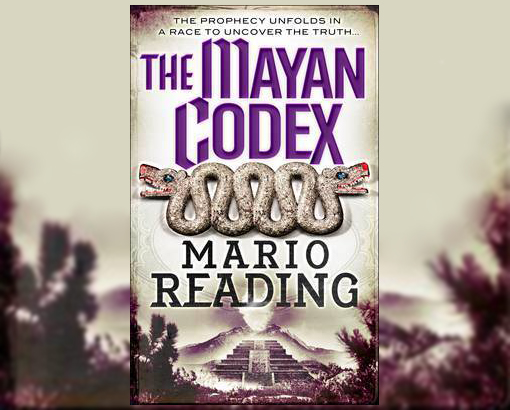 For all of its fascinating history, Mayan culture has produced relatively little in the way of modern pop culture, literature, or entertainment. Nearly eight years ago, however, novelist Mario Reading published a book titled The Mayan Codex –– a rare fictional foray into the histories and cultures of ancient Central America.

In the real world, the notion of a Mayan codex refers, unfortunately, to lost and destroyed history.

As was discussed briefly in Concession to Conquer the Yucatan – conquest, and Christianization in this part of the world led to the “destruction of the Mayan and the entire Mesoamerican codex and artifacts.” In our world, history now exists in ruins more than in writings.

This is not precisely the world in which Mario Reading places his story, however.

The Mayan Codex is a novel of harrowing adventure in which one Adam Sabir is seeking to unlock the secrets of the famous prophet Nostradamus. He is doing so specifically to unravel a riddle that hints at the coming of the antichrist, as well as armageddon. The riddle (and pursuit by a demonic cabal) leads Sabir into Central America, where a Mayan descendant in possession of an ancient codex represents the last hopes of deciphering the prophecy.

It’s an interesting book. More than a little Dan Brown-Esque, as fans of the Da Vinci Code author may surmise from the summary.

But it is best understood within its broader context.

The Mayan Codex is actually the second book in a trilogy that began with The Nostradamus Prophecies.

This first title was published in 2009 and became a bestseller in Europe, with one prominent review stating that Reading brought “more nuance, substance and action” to a historical conspiracy adventure than one might expect.

This may be slightly less true of the second book.

What is most interesting is when one reads them in succession. You’ll notice Reading’s transition from relatively familiar material in book one, into a far more mysterious world in The Mayan Codex.

The first book sees Sabir starting off in Paris and ultimately following a lead toward the recovery of Nostradamus’s lost prophecies (the seer having famously completed only 942 of a planned 1,000). And that setup alone made the novel feel familiar to readers. Paris is a comforting setting, for one thing. But Nostradamus, too, is something of a known quantity. Readers know his name, and many have come across him in modern pop culture or entertainment.

Nostradamus is mentioned or referenced in shows ranging from The Simpsons to Chappelle’s Show.

He’s appeared in song lyrics and is a part of both DC and Marvel comics lore.

The video game Assassin’s Creed Unity challenges players to solve 18 “Nostradamus Enigmas”. And the Gala Bingo game titled Nostradamus simply presents an image of the famous prophet presiding over a digital slot machine reel packed with mystical symbols and laid out over a historical background. In short –– one way or another –– you’ve probably had cause to become at least vaguely familiar with the figure.

The Mayan Codex does not have that advantage, and as a result, feels somewhat less grounded than its predecessor.

While Adam Sabir is still working to solve Nostradamus’s prophecies in the second book, he is somewhat unmoored doing so.

This is likely why the first book received greater accolades.

What ultimately gives The Mayan Codex a greater sense of purpose and direction, however, is its relationship with Mayan culture.

This is not to say that Mario Reading presents a wholly accurate depiction of Mayan culture or history. Nor, for all we know, that he attempts to.

The Dan Brown comparison may be easy, but it is apt in the sense that just as Brown has famously done with various parts of the world and chapters of history, Reading uses bits and pieces of the Mayan civilization to give his story depth and intrigue.

Serious scholars of the culture may find the book’s depictions somewhat lacking; there’s a little bit of Indiana Jones to it all, and cinema’s favorite archaeologist was by no means a true conduit to world history. Read more casually though, The Mayan Codex is an entertaining novel that offers us a rare fictional journey into aspects of the culture.

Ultimately, if you’re interested in adventure fiction and historical conspiracies, it’s well worth a read – though you’ll definitely want to start with book one!