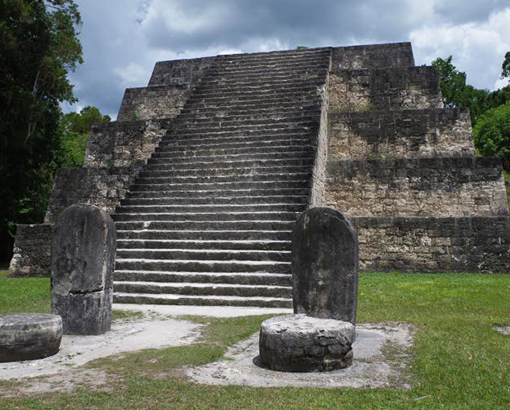 As we continue to go through global energy shifts, our contributing writer Jacques shares this thought-provoking two-part series on Paradigm Shifts in the Age of Polarity. In this series, he illustrates the important influence of Maya katun energy shifts – how they influencer human consciousness and behavior; and how each katun embodies a Spirit of the Age (in Western terms also known as a zeitgeist).

In order to have a general understanding of how the Mayas perceived and measured time, a few time-related concepts need to be taken into account.

The Maya perception of time encompasses energy and space. Everything contains, and therefore is, energy. The energies measured and mapped emanate from the earth and from the four directions and from the cosmos – and everyone is affected by them.

For the Maya, time is circular and cyclical, depending on which aspects of it are being measured; however, there is an overall linear progression in the long run. Time is measured and counted for different reasons and with different objectives. The calendars interact with each other to form cycles (and circles) within cycles. Some Maya calendars measure agricultural cycles, while others measure human cycles, and yet others are used for ceremony or prophecy. There are as many as twenty Maya calendars in existence, but several of them have fallen out of use for various reasons.

In contemporary terms, few people would normally be conscious of these energies, but all people would be subconsciously aware of them. For example, sometimes these energies can be felt or sensed. Days, weeks, and even years “feel” different from others. However, outside of Western astrology, the idea that time periods could have different energetic patterns – which actually could have practical, literal, or physical effects – is usually not taken very seriously.

Mayan archetypes, deities, or gods were assigned to express, depict and present the characteristics of these energies. Thereby, time and energy were given “shape”, so to speak. The traits and characteristics of these archetypes, deities, and gods would then “embody” the natures of the ages, in order to understand and “see” them better. This gave time dimensional qualities that go far beyond the concept of time simply being measured as an arbitrary linear process.

This is the gift that the classic Maya civilization has left for the world, and it is especially relevant during these times that we live in. Simply put, since people in the modern world do not generally sense or appreciate the subtle energies that influence their lives on a daily basis, systems such as the Mesoamerican calendars can be of immense value to them in providing a map of the unknown. Furthermore, it could enable them to anticipate the general characteristics of future time frames within particular time periods, as the Maya did.

The circles and cycles that come around again are never absolutely the same every time. They have similar characteristics, but it is worth remembering that there are smaller cycles (and circles) within larger ones, with the very large ones stretching many thousands of years into the past and future.

There are various layers, with the smaller cycles turning faster than the larger ones.

The last couple of katuns in the 256-year Katuns Cycle (also known as the Maya Short Count Calendar) are always considered to be unstable, and they are said to usually include the collapse of systems and structures. According to prophecy, the beginning of a brand new 256-year prophetic cycle would subsequently usher in a new dawn and a complete rejuvenation of the world. Symbolically, Katuns 2 and 13 Ahau (the combined period of 2012 to 2052) would constitute the winding down and final collapse of the Old World, before the New World rises from the ashes.

The accuracy and power of the prophetic Mayan calendars should not be underestimated. That is if we can manage to read them, considering their complexity. In this 2-part series, a humble attempt will be made to illustrate clearly how katun energy shifts influence human consciousness and behavior. Selected past katun shifts will be evaluated to determine whether, indeed, any real changes occurred in terms of real-world events. The objective will be to illustrate how each katun embodies a Spirit of the Age (in Western terms also known as a zeitgeist).

Many ideas were floated about what could or would happen on or around December 21, 2012. Some of them were bordering on the fantastic; duality would disappear, the magnetic poles would switch positions or shift, instant telepathy would ensue, volcanoes would pop, earthquakes would shake and tectonic plates would shift.

Nothing of the sort happened on that day, and the result was an epic let-down for many people who had expected an instant paradigm shift [1]. Thus, most people lost further interest and got on with their lives.

An example of a real paradigm shift would be if we had to revert from our present-day, modern, industrial-age lifestyles to pre-industrial, traditional, agriculture-oriented lifestyles in a relatively short period of time, say, within a decade or two. That would constitute a real paradigm shift. However, having to live with limited access to electricity, for example, or without machinery or automation would, perhaps, would be just too far-fetched an idea to contemplate.

Going back in time in practice would be completely counter-intuitive to what we would normally conceive of as going forward, which would be to use more advanced technologies. In modern times, paradigm shifts are often thought of as being linear events, like all jobs being taken over by robots – a shift that would require using more electricity, not less. While holding that thought, let’s consider the concept of paradigm shifts a bit further.

The Shifts of the Short Ages

In the context of the Maya calendars, a shift happening from one short age (a katun which consists of approximately 20 years) to the next would constitute a mild paradigm shift. Such a transition would happen within a short enough time frame for most people to become aware that many things seem to be changing at the same time, which would make it seem as if time is speeding up. Yet, actual changes would be happening slowly enough to not cause a shock to people’s systems. At first, there may be some resistance to some of the changes, but most people would eventually adapt to the new paradigm.

Individuals who are somewhat traditional or more consciously autonomous would usually assess social and cultural changes according to their own personal values, principles, and ethics – which they had already clearly defined – and would then make conscious decisions about going along with certain new trends or not. They may eventually settle somewhere in the middle, retaining some of their old ways and adopting some of the new ones depending on what suits them best.

Trends happening in post-modern societies these days are generally perceived within the context of moving forward, i.e. “progressing”. Whether negative or positive, they are considered as progress nonetheless – and when changes produce negative results they are perceived as being the price that we have to pay for progress. That is because post-modern Western culture is not values-, principles- or ethics-based (anymore), but trends-driven. Society, therefore, tends to go along with whatever new is taken up by society in general – and that is usually commercially driven.

Nevertheless, few people are aware that there are also energetic movements at play in the universe which can influence real events and trends. On a higher level, metaphysical energy influences the Spirit of the Age (collective consciousness), and when that shifts it causes behavioral changes in people’s ways of thinking which are reflected in their attitudes. These changes are usually most clearly reflected in group attitudes.

By having done away with traditional internal structures in the form of human value systems (which would usually regulate external conduct), group consciousness is today much more prone to being affected by the negative aspects of the Spirit of the Age than before. Today, technology – in the form of personal devices – provides a broadcasting channel for the boundary-less (and anonymous) expression and projection of the negative as much as for the positive elements of the Spirit of the Age.

When we consult extensive online discussions about cultural changes over the decades – a practice known as decadeology – we find that there is consensus in forums dedicated to the subject of when major cultural shifts took place.

The objective of decadeology is to identify the distinctive cultural Spirit of the Age of each decade. For example, how 80’s culture differed from 90’s culture. However, decadeologists seem to accept that decadeology is not an exact science because cultural shifts never seem to happen exactly at the beginning or end of Gregorian calendar decades.

A Maya katun measures 19.7 years, and a half-katun measures 9.85 years. The midpoint of a katun indicates a peak. The two sides (halves) of a katun are slightly different in character from each other, due to ascending and descending energy. Lengthwise, half-katuns are almost equivalent to decades but are almost never exactly synchronized with the start or end dates of decades.

When decades are compared with half-katuns, it can be observed that cultural shifts tend to take place around dates closely matching katun and half-katun shift points.

Maya ‘katunology’ (a term coined for this essay) could, therefore, be considered more accurate than Gregorian decadeology, because katunology is based on finely calculated energy shifts corroborated by centuries of observation, is recorded in mythology and is also embedded in the symbolism of the archetypes and numbers (known as tones) that are used in the Maya calendars.

The Gregorian calendar, however, does not imply any energy shifting, and it does not contain any symbolism. We can conclude then that the cultural shifts observed and recorded by decadeologists are (unbeknownst to them) more than likely katun energy shifts, but placed within the context of decades.

Examples will be presented in Part 2 …

J.J. Montagnier is an independent researcher and writer. He has been studying and writing about Maya calendar-related subjects since 2014. He traveled to Central America in 2015 to familiarise himself better with Maya culture and history.

This article has been written for general consumption and some concepts have been simplified. The views and opinions are those of the author. Creative license has been applied to make some concepts more accessible.

The Book of Destiny – Unlocking the Secrets of the Ancient Mayans and the Prophecy of 2012, by Carlos Barrios (published in 2009)

The Book of Chilam Balam of Chumayel, by Ralph Roys (published in 1933)

The Long and Short of the Mayan Calendar, (published in The Mountain Astrologer, Dec. 2004 / Jan. 2005), by Bruce Scofield

1 thought on “Paradigm Shifts in the Age of Polarity (Part 1) – Maya Time, Space and Energy”